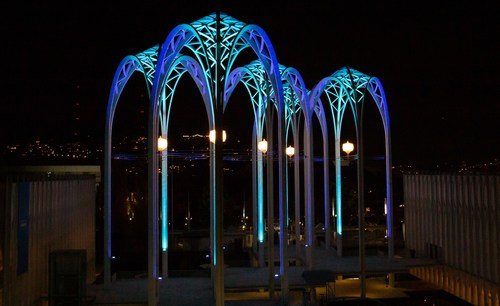 SEATTLE, Oct. 20, 2021 /PRNewswire/ -- Pacific Science Center (PacSci) today announced a collaboration with Amazon Web Services (AWS) and the Seattle Kraken to build a new, state-of-the-art lighting system within the iconic arches on its Seattle Center campus, powered by AWS. The new energy-efficient system enables PacSci's arches to share the excitement of the Kraken with the entire Seattle area through special choreographed lighting displays before, during and after home games at night. The lights will be activated for a game-time show, with a vivid "goal light" celebration every time the Kraken score a goal during a night game at Climate Pledge Arena, also part of the Seattle Center campus. This new lighting system creates opportunities for collaboration with other organizations and artists, adding to the new energy and life of the Seattle Center campus.

"For nearly 60 years, PacSci's iconic arches have been a historic and beloved part of the Seattle community," said Todd Weatherby, Vice President of Professional Services at AWS. "AWS is thrilled to help Pacific Science Center leverage the power of the cloud to further enhance the arches and extend the game-day excitement to the Seattle community at large."

The new lighting system works by pulling live Seattle Kraken game information from Sportsdata.io, a sports data provider, onto AWS in near real time. Once the game information is processed by AWS Lambda (a serverless compute service), Amazon Simple Queue Service (SQS) triggers the Pacific Science Center's lighting controller to initiate a custom lighting sequence when a home game goal is scored by the Kraken.

More on Washingtoner
"We're thrilled to relight the arches with a new state-of-the-art, cloud-based system that enables this collaboration with the Seattle Kraken. This is an exciting step forward in PacSci's continued renewal and renovation," said Will Daugherty, president and CEO of Pacific Science Center. "Our work with AWS allows us to leverage the power of the cloud to participate in the celebration among all Kraken fans of the team's first season. We're excited about the possibilities, and this is just the beginning."

PacSci and its iconic arches were built by esteemed local architect Minoru Yamasaki for the 1962 Seattle World's Fair. At 132 feet high, the white cement structure consists of five arches that soar high enough to be seen throughout the city of Seattle. The arches feature 25 energy-efficient lights with endless LED color display options. This new lighting system will debut in October and will be primed for a spectacular evening when the Kraken play their first night game in Climate Pledge Arena.

"We're excited to have a high-impact, dynamic representation of the action on the ice that can be shared with fans across the city, in near real time, on the iconic arches at PacSci," said Jonny Greco, Senior Vice President, Live Entertainment & Game Presentation at Seattle Kraken. "We look forward to celebrating our first home goal, and many more, through this collaboration with PacSci and AWS."

Lighting options include:
The collaboration and arch lighting are an exciting part of PacSci's renewal as well as the revitalization of Seattle Center, which includes the debut of Climate Pledge Arena, Seattle Kraken's inaugural season and the Monorail's recent update. No matter where fans and residents are around the city, they can celebrate and look to the arch lights for a sense of community. To learn more about the collaboration and PacSci's arches, visit www.pacsci.org.